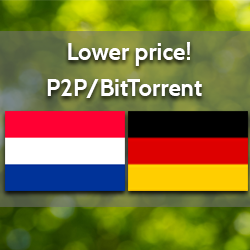 P2P BitTorrent VPN is one of our more popular packages. As such more and more customers are either deciding to get this type of VPN plan or a different VPN plan but with access to the same servers amongst others. Because i’t popularity is growing we have done something unexpected…

The short answer is YES. The longer answer, especially for those of you who are either considering it or have not heard about this option comes right now.

As you all know VPN – Virtual Private Network – a virtual tunnel that connects you, your device directly to VPN server has few interesting properties. First of all it hides your IP address behind IP, behind VPN server itself. In case of P2P BitTorrent VPN this means, that whoever tries to find out IP addresses of downloaders / uploaders will fail to get yours. Considering that disclosure of your own IP in torrent network can be risky we would strongly advise against it.

Secondly, VPN also encrypts your traffic (data you send and receive). This means, that if your ISP is tasked with monitoring your traffic against P2P and torrent downloads he will not be able to do so. Your traffic will remain hidden as well as the place you send it to / receive it from.

So how did we make our P2P BitTorrent VPN better? We have lowered its price!

From today onwards our P2P BitTorrent VPN will be priced as follows:

For that price you will get access to 8 VPN servers located in Germany and Netherlands, full anonymity and unlimited data bundle. Access to proxy servers remains included free in the package.

And as our other packages and service – no catches, no commitment.