As you know, our VPN service has undergone some major changes recently. Beside upgrading all VPN packages with news SmartDNS feature we have introduced refreshed  application for Windows VPN and introduced brand new Mac OS VPN application. Since you seem to have liked our video presentation of Windows VPN app, we thought it might be a good idea to create similar clip for Mac OSX VPN.

We hope that you like what we have created for your Apple Mac computer. We wanted to bring you all the benefits of VPN but in form, that is as easy as possible to use. So, if you like to watch 😉 have a look at at our video, follow the steps and enjoy new VPN app on your Mac.

As with Windows VPN app we would like to point out to one of very nice features. Application Killer. Mac computers are most popular in USA where use of torrents and P2P is quite tricky. As you have read on our blog just days ago, even access to The Pirate Bay might be difficult without VPN, not to mention the fact to downloading stuff from the internet under your own IP might turn out to be a very expensive mistake.

So, as we just said. Make sure you’ll take all the advantages of VPN with our new VPN software. 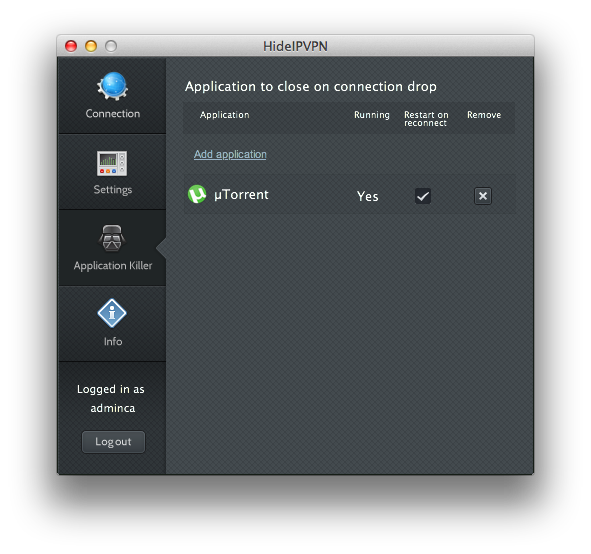 Add applications to the list and we will close them for you if VPN connections drops. Once it is (automatically) re-established our software will start all applications added to the list.

If you have any suggestions about what new features you would like to see in our apps or what you think should be changed so that they (both Windows and Mac) are even easier to use feel free to comment on blog or catch up with us at Facebook or G+.