Data Retention Laws in Australia – Use a VPN 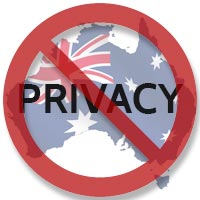 From October 13, the people of Australia will not be able to exercise their right to online or any sort of privacy. Digital data that is logged when you use your mobiles, landline phones, your text messages, emails, as well as your location information will be retained by ISPs and telcos. The data will be monitored by 21 different agencies of the executive government.

This takes away your privacy and provides all your personal and private details up for looking for the government agencies. Communications over emails, mobile phones and fixed-line phones will be monitored. Your personal and professional habits will constantly be watched and your financial transactions and download histories will be regularly checked by government agencies. If you are an Australian living in Australia, then October 13 is the day your private life ends.

The legislation for this will come into effect from October 13 and there is nothing Australian citizens can do about it. Even if people try to petition their ISPs to boycott this, it is highly unlikely that they will comply with them. This is because the government will be imposing a $2million penalty on any ISP or telco that does not comply with them. Even if a user feels that his activity and usage is being monitored illegally, there is little luck for justice. This is because firstly, the chance for anyone to discover that their internet usage is being illegally pried upon by an ISP is slim. Even if one was to somehow discover it, there is a two-year jail sentence for anyone who reveals an instance of metadata access.

How using a VPN can help

The new legislation takes away all your privacy and any chance of being anonymous while using the internet. When the biggest threat to privacy is the government itself, then the times truly are desperate for people. Desperate times call for desperate measures, but the remedy for this terrible situation is not desperate by any standard. VPNs have been under use by Australians for many years now, with many VPNs providing a large number of servers in the country.

VPNs connect you to the internet through an encrypted tunnel, hiding your true identity from everyone on the internet and keeping your data safe from attackers and hackers. The new legislation that will come into effect from October 13 in Australia will require all ISPs to keep logs about the internet activity of users. You can protect your identity by using a VPN as it hides your activity from ISPs and telcos. All they will be able to see is that you are connected to a VPN server. Of course, proper care should be taken to choose a VPN service that does not keep logs itself, because while ISPs and telcos won’t be able to see your activity, the VPN will be. Choosing VPN HideIPVPN is the right choice.

Although the Australian government has asked the people and ISPs to accept the legislation about data retention laws without any protest, people are not so keen about it. Privacy is appreciated and required by everyone, and any sort of justification about its violation fails to convince anyone. Since there is nothing as can be done to prevent the legislation coming into action, using a VPN to protect their privacy is the only thing that Australians can do.