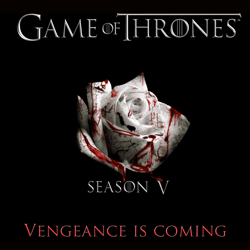 As you may remember from the previous years HBO production “Game of Thrones” has always been a very popular content between torrent users. However this year, with the premiere of 5th season of this popular show it seems that rules have changed a bit. It might be a good time to consider getting torrent VPN

In the past HBO was not very happy with people sharing their content for free on Bittorrent and P2P networks, but at the same time it was used (partially) as a promotion to make “Game of Thrones” a world known title and to sell merchandise. Also, HBO knew that it offered no alternative to those users who did not pay for HBO Premium channels and were unable to use its HBO Go service. Now, with start of its new streaming service HBO Now it seems that HBO starts to take a bit different approach.

As you can read in article at digitaltrends.com HBO started to send out warning letters to users who uploaded or downloaded their content.

“[…] takedown notices have been issued through HBO’s anti-piracy partner IP-Echelon. They instruct ISPs to identify the IP addresses associated with the infringements and pass on a warning about repeated violations of their terms of service — ultimately users could be cut off, but that would be down to the Internet Service Provider.”

One of the reddit uses has publish a letter he received. If you are wondering why HBO has suddenly changed it position where “GoT” is concerned, we think it is because of new streaming service and potential partners. Once the exclusivity for Apple to sell HBO Now ends all parties involved must hope to get their slice of the cake. With such move HBO shows that it will not tolerate (anymore) people watching their content free and robbing their partners of income. Now (in theory) we all have an alternative to torrents.

If you do not wish to receive such warning letter in future we strongly advise  to consider hiding your IP address behind torrent VPN.