How to unblock websites at work or school 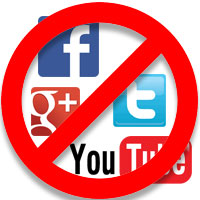 If you do not have a big data plan in your mobile or your device has only WiFi connectivity, quite often you will want to use it in school or workplace. Because in such places most of the time there are strong limitations of the way Internet can be used we thought we will write short post about how you can bypass government or workplace censorship.

How to unblock websites at work or school

If you happen to be at work, School, hotel, government building and are forced to use public WiFi network there is a very good chance it will not work as you could expect. In case of work or school most of the time network access is limited or in another words there is a network censorship or Internet censorship.

Simply, because such networks have one, specific gateway to the internet, out side world admins do limit what you can do online.  Reasons for such move are different. Most of the time they are put in place because of security of internal terminals or just because employer (in cases of countries like China government) does not want you to access specific sites or services.

It is understandable, that security of such school or work place networks is important. Since a lot of hacking can take place via browser it is also clear why admins want to block access to sites that might be (even potentially) a threat. However if you want to use your own device (and you are allowed to do so) it will be similarly restricted even though it is not real security threat. So, what can one do to unblock Facebook, YouTube, Snapchat, Gmail and other services that do not work? Now we will tell you how to unblock websites at work or school.

Short and simple answer to problem with network censorship at work is VPN. It is perfect and easy solution to bypass any network blockades that administrators might have imposed over network gateway.

It is highly unlikely that administrator of school network or workplace network would block access to a specific VPN server. But even if such thing would happen, with our VPN service you can easily switch between server. Once you connect to a VPN server a virtual tunnel is created, those restrictions that were introduced to filter and block access to specific sites will no longer apply to you.

All you traffic is encrypted so there is no way to block specific types of data (like video stream) and since you are not connecting to Facebook, Hulu, YouTube and other sites directly (but you access blocked sites via VPN) your data will not get blocked.