Netflix seems to be very popular news in recent months. Looks like even though its services are not available everywhere and users have to use different ways to unblock Netflix access it is already a world brand! This year we can expect further expansion of Netflix in Europe. But before it happens we would like to invite you to join Netflix now! But first, the news…

So, you live in Poland, France, Germany, Hong-Kong or Australia. With help of VPN or SmartDNS technology you change IP address and use proxy to unlock Netflix access, because service is not available where you live. You pay you subscription fee as anyone else. Also, since you started using Netflix you hardly use torrents any more. Would that describe you? Do you feel like a hacker and pirate because of that (we doubt!). But you are one! And no, not according to Netflix!

It is estimated that Netflix has already between 50 – 200k users “down under”. The main reason why Netflix is not available in Australia are exclusive deals signed by “Hollywood” and Newscorp. (who happens to own The Australian). This loose of control over VOD market makes all the parties very unhappy.

But… would you call yourself a pirate because you use DNS to access Netflix?

House of Cards on torrents may hint…

House of Cards is well known to all of you. Regardless of the fact if you are Netflix customer or not. It is also one one the most “pirated” TV shows. 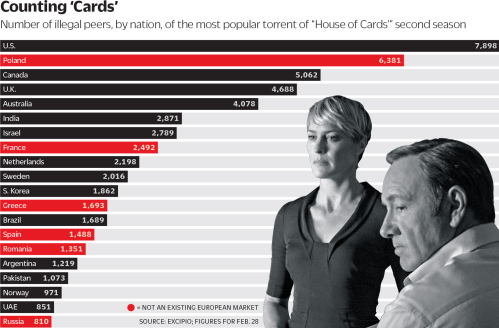 This graphics clearly shows in what countries Netflix productions are the most popular. Considering that Netflix in the past confirmed it is looking at torrents to confirm if content they want to add is popular with public, they might look at torrents also when making decision about their expansion…

Only time will tell. For the time being we strongly recommend to try our SmartDNS service (test it free for 7 days: https://billing.hideipvpn.com/free-trial-smartdns/) – yu will be able to enjoy Netflix (US & UK libraries), Hulu, ITV, Crackle, Sky, BBC iPlayer and a lot, lot more….