Top countries where you must use VPN 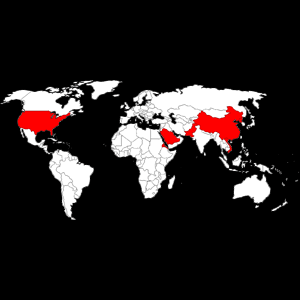 The traffic on the internet has grown by unimaginable amounts in recent years. This has to do with many things like the obvious benefits of having access to the internet as well as developed countries taking the initiative to help bring people from third world countries to the internet. With all the technological advancements that have taken place over the years, internet is considered as a basic service which everyone should have access to.

Everyone knows about the Great Wall of China, and everyone also knows about the Great Firewall of China. The Communist Party of China strictly regulates the content available on the internet in China and monitors the internet activity of users. Social media and search engines like Google are blocked, and China is the worst country when it comes to imprisonment of journalists. Millions of people use the internet in China and their only means to anything resembling to free internet access is to use VPN.

Kim Jong-un and his followers have such a strong hold on communication and media in North Korea that only a few people have access to internet, the few people being elite politicians. Other than that, some schools and institutions have access to a heavily regulated intranet.

This African country is another country that censors the internet heavily. Access to the internet is anyways available only to 1 percent of the population and that too with dial-up connections. On top of all this, the internet usage is severely restricted, thus making VPN usage absolutely vital.

Almost all countries in the middle-east censor the internet to a great extent, but Saudi Arabia easily tops the lot. In a shakedown in 2014, many journalists were imprisoned for sharing content online that was against the best interests of the nation.

Vietnam is another country where internet access, although available widely, does not bear freedom since the government censors a great deal of it. Many online journalists and bloggers are closely followed by the government and barred from attending events to prevent them from sharing its details. Apart from this, they also, of course, monitor people’s activity on the internet.

All the other countries in this list restrict what is available on the internet, but USA is different in this respect. However, the heavy monitoring of people’s activity on the internet and building detailed personal profiles from the data accumulated from the monitoring is astounding for a country that is a superpower. Details about the NSA’s censorship programs brought people face to face with the reality that all their telephonic as well as online communications are monitored by the government.