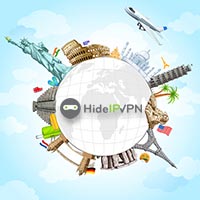 Internet laws in today’s world are different in different parts of the world. Some countries are liberal in allowing their citizens to use the Internet freely while some countries are strict in that regard and pose heavy censorship laws on the internet usage of the common populace. There are, however, not a lot of major countries that pose heavy restrictions on people’s internet usage, so things are not as bad for most people of the world. Even geographically restricted services like Netflix are available in most developed countries of the world. But things can suddenly change for someone who is traveling abroad for a long duration of time. For them, using a VPN comes rather handy.

What is a VPN?

Why do you need VPN while traveling abroad?

There are a number of reasons why using VPNs can make your life a lot easier when you have to travel abroad:

As we saw in this article, using a VPN while you travel abroad can help you tackle all problems related to internet usage. People face the problem of not being able to access their favourite TV show, movie or sports streaming services when they travel abroad. Using a VPN can not only help you with that but also with other things, as discussed above. VPN like HideIPVPN has a great global coverage, do not keep any connection logs, and provide great connection speeds, all of which are essential for a good VPN service.