Unblock Netflix US – Epix deal is… 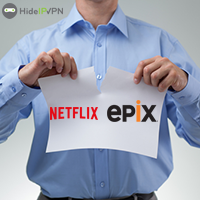 Netflix needs no introduction. We hope that same goes for our awesome Smart DNS and VPN service. However we know we can not compare with VOD giant in any way. This is why we thought it might be a good occasion (changes to this service) to tell the world how to unblock Netflix US and what to expect with the end of this month.

How to unblock Netflix US?

HideIPVPN gives you choice of two separate services. In some cases, like the subject above – unblock Netflix US – they are quite similar. In reality though they are quite different and both complement each other.

Unblock Netflix US with VPN – this is you choice no 1. Why use VPN? Beside stating the obvious – it will unblock Netflix US there are a lot more important reasons why you should want to have VPN. This service will allow you (always & everywhere) to hide your IP address. Theas means total privacy and anonymity in the Internet. No more worries about your ISP snooping around you or corporations trying to assess your online habits with collection of “Big Data”. You traffic will be encrypted and if you will use public, open networks to connect to internet you device and data will be a lot safer. With our VPN you can get US IP addresses (can not unblock Netflix US without them), UK IP address and also IP from Germany and Netherlands that allow for anonymous use of P2P and BitTorrent networks.

Best of all, you do not really have to choose! Get our VPN and we will throw in Smart DNS free of charge! And in our most comprehensive VPN package you will also get P2P VPN.

What changes are coming to Netflix?

Netflix decided not to renew deal with EPIX (current one ends with the end of September). What it means is that Netflix (only in the US!!!) will loose rights to following titles (we name biggest ones amongst others):

“Hunger Games” movies and “Transformers: Age of Extinction”,  “World War Z”, “Rocky” films and quite a lot more. However good news is, that most or all those moves will be available to watch for Hulu subscribers. And with our VPN and Smart DNS you can do both – unblock HULU US and unblock Netflix US.