RIAA fights torrents on all levels 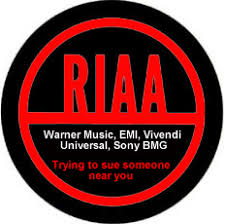 I suppose that most of you are aware what is RIAA and what is the “thing” they do. You probably read quite often about people they sue and amount of money they ask for as a “compensation”. Today we read at TorrentFreak about small change in their policy.

As you know RIA is the most known for pursuing single users (sharers/downloaders). Single users were tracked by their IP addresses and data their ISP’s had to revel to RIAA. Although this policy is under question as even within one house a single IP address often, can not be assigned to an actual user and RIAA it self spends more money (from “sponsors”) than actually makes it is still a BIG problem for a person who will come under attack. We quite often write here about this to make sure that nor you, nor your friends live under false illusion of anonymity in the internet. Because of that we have also created a special package that especially users from USA should take under consideration –

For $7.90 / month we will provide with an access to 3 VPN servers located in the Netherlands. There will be no cap on speed and unlimited amount of the data you can transfer through (download/upload) the server (take that under consideration when you compare us with other VPN services). This means that you can be connected to VPN server 24/7 and not only download what you need in complete safety but also surf the net as a really anonymous user. Now… back to article…

TorrentFreak says that this time RIAA went after a site that lists torrents. “The RIAA obtained a subpoena at the U.S. District Court of Columbia and has asked the whois privacy service WhoisGuard to hand over the IP-address, email and all other identifying information related to the account holder [TorrentHound].” It looks like the WhoisGuard will have no choice but to revel to RIAA all the data it possess on the subject.

As TorrentFreak we are also very interested what will happen next and what RIAA will do with this data. Will they try to close down the site or will they as the owners to reveal all the data it has in regard of its users? Maybe someone at RIAA though it will be cheaper to ask torrent sites (in the US) themselves for data of their users than do the search by themselves. Whichever it is we will look for more information on the subject and as soon as we learn something new we will let you know.

In the mean time we ask you again to consider if it is worth to get our (or any) VPN service if you use p2p and torrent networks or is it better to wait for a settlement letter (“The standard settlement is a payment to the RIAA and an agreement not to engage in file-sharing of music and is usually on par with statutory damages of $750 per work, with the RIAA choosing the number of works it deems “reasonable”.” – more on this at Wikipedia) from RIAA and others like it?