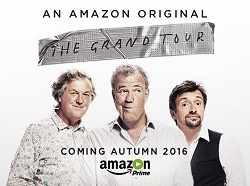 Fuel in our blood streams got very hot again. Finally we know what the name of the new Amazon show similar to Top Gear! It will be called The Grand Tour. And here is how and when you can watch it online.

The Grand Tour is the new Amazon “Top Gear”

As you may remember a while back we used to love and watch the best TV car show in the whole world – Top Gear. Show was presented by Jeremy Clarkson, Richard Hammond and James May. Over the years Top Gear gathered massive audience. It is obvious that HideIPVPN users were among the fans. Because of that we  have been advising you about how to watch Top Gear online abroad at least few times. After JC scandal last year trio of presenters left BBC. There was a lot of speculation where will we be able to watch their new show. Now we know where, when, how and most importantly the name of new program. Amazon Top Gear competition is called The Grand Tour.

How to watch The Grand Tour Online?

The only place where you will be able to watch The Grand Tour is Amazon Prime Video service. Not that long ago we told you how you can unblock Amazon Prime Video service. In short: first you need to pay for Amazon Prime service. You can choose either US or UK account. Remember, that this service allows (beside watching movies and TV shows included in subscription) to also get exclusive deals on deliveries from Amazon shop and also unlimited storage for your photos. Of course account itself, if you do not live in UK or US is not enough. You will also need a way to hide your foreign IP address or access to fast proxy server. First step can be easily sorted through our VPN service. With few clicks you can change your IP address to an USA or UK IP. Once connected you will have no problem in watching The Grand Tour online.

Second method – proxy is very useful if you want to watch Amazon Prime on your telly, for example through Xbox One Amazon Video app. Simply sign up to our Smart DNS service (it is also included for free in our VPN plans) and all content available at Amazon Prime Video will be there for you to watch.

So… any thoughts which of the two will be better? Which show will come on top – The Grand Tour (available to watch this autumn) or Top Gear with new hosts?

We hope both will be great fun to watch!