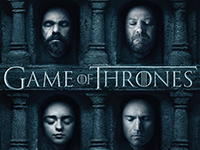 If you remember in the past HBO was not so strict where it came to piracy and “Game of thrones” series. From what we recall with first few seasons HBO was even quite proud that its series was so popular over the torrent networks. Looks like those times came to an end. Our advice: don’t share HBO Game of Thrones online. And here is why…

We are now in the 6th season of GoT. Series has changed a bit over time. Less nudity yet more popularity. Also HBO’s approach to whole online sharing concept has changed. With first few seasons, HBO used torrent networks to make the series one of the most popular in recent years. No action were taken against people getting GoT episodes from torrents. But now the game has changed.

Last year new streaming service was brought to life. HBO Go was joined by HBO Now. Streaming service, almost for everyone. With the start of HBO Now users in USA lost an excuse to download Game of Thrones from torrent networks. And not only in USA – here is how to watch HBO Now outside USA. So now, that (almost) anyone who wants to watch Game of Thrones can do so, HBO changes its approach.

Don’t share HBO Game of Thrones under your own IP!

As we have learned form article published by Business Insider, HBO enlisted IP-Echelon (an anti-piracy partner) to help fight GoT copyright infringements. On the IP-Echelon web site you can read the following:

We monitor networks for the appearance and transfer of our client’s content. Our distributed global network allows us to gather accurate information regarding the nature and origin of infringements.

The effect is simple. Thousands of notices with copyright warnings for alleged piracy of the series were send out to different ISP’s. Notices contained users IP addresses and ISP were asked to contact “pirates” “and take the proper steps to prevent further downloading or sharing of unauthorized content and additional infringement notices.“

Our advises on the issue are:

Want to check out how VPN works? Click and try for free!