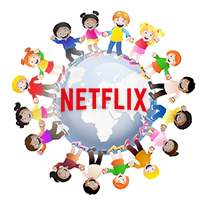 Netflix everywhere, wow!!! This has been an exciting evening yesterday at CES 2016. Looks like Netflix is now a truly global service. Here is what has changed and what it means for you.

Netflix has been like a holy Grail for many internet users around the world. A service that has originated from a US DVD rental company has, few years back, changed its service profile and from DVD rental company turned to a most recognized streaming service in the world. By some even called a TV KILLER. Netflix has been slowly expanding its services to a different countries beside USA. Canada, United Kingdom, Holland, South America, etc. Still, there was more places without official Netflix service than other way around.

However Netflix was not fussy and (as you and we) not a big fan of any geo-restrictions for content. This is why it was never a problem to setup an account and payments from regions where service was not present. With VPN service or Smart DNS anyone who wanted to access content were able to do so. Still, many people were afraid to do that. Now the game changes, a bit.

As we have mentioned above Netflix never was a big fan of geo-restrictions over content. Still, it has to play by market rules and can only share (make available to stream) in different regions titles it has rights to. This is why for example in Poland or France users will not be able to stream shows like “House of Cards”.

Netflix knows this is not good for its customers and a situation that does not encourage people to pay for its services. This is why it has nothing against customers, who signed up for service in one region to access its content in a different one. This is where VPN and Smart DNS come very handy. If you are paying for Netflix… why not get more choice?

With our VPN and Smart DNS you can now access Netflix in: USA, Canada, Germany, France, Holland, United Kingdom. Poland will be added (to our Smart DNS Netflix regions) soon. And believe us – a lot of titles differ between those libraries. Since with both Netflix and HideIPVPN you get free VPN trial period the best advice we can give you is – why not try yourself?