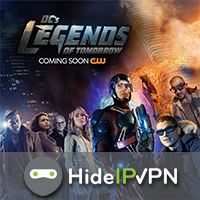 If you like Superheroes & Hulu you will love this news. More Heroes are coming to your TV screen in few weeks and we well you what to expect, how to watch it and what is coming (the rest of text may contain spoilers!).

Flash & Arrow will get new friends!

If you do follow CW’s series presented on Hulu Arrow and Flash there are two very cool episodes coming (already available to watch for Hulu Plus subscribers). “Legends of Today” and “Legends of Yesterday” both of them are one of those cool crossover episodes where Flash and Arrow will cross paths. In those two episodes they have to save the life of new Superhero – Hawkgirl. We also get to know a new, Supervillain – Vandal Savage. This is all an introduction to brand new upcoming series DC’s Legends of Tomorrow.

If we are right, new series will premiere  on Hulu on 21st on January next year, so there is not log to wait.

How to watch Legends of Tomorrow on Hulu?

At the moment we offer you two ways on unblocking Hulu that will allow you to watch Legends of Tomorrow. It is also worth to remember, that Hulu has changed its policy regarding paid subscription. Right now it looks like you can pay for Hulu Plus access with cards issued outside of USA (just like with Netflix).

First way you can unblock Hulu and watch Legends of Tomorrow is VPN. If you decide to get one of our VPN packages, beside the ability to change your IP to USA IP you will get other benefits. For example you will be able to preserve your anonymity online. There is another way of unblocking Hulu included in our VPN packages. It is called Smart DNS and it is also offered as stand alone service (but without all VPN benefits).

Smart DNS is great to use with all those devices that lack VPN support. Game consoles and Smart TVs. You simply change address of DNS server you use, and we take care of the rest. If you request service like Hulu, BBC or HBO we will redirect traffic through special proxy server. It all happens instantly and in the background so you do not need to do anything else.

So, what do you think? Will you add and watch Legends of Tomorrow each week next to Flash or Arrow? Hawkgirl, Firestorm, Atom, Captain Cold, Heat Wave, White Canary or …. Who is your favourite character from DC Comics universe?